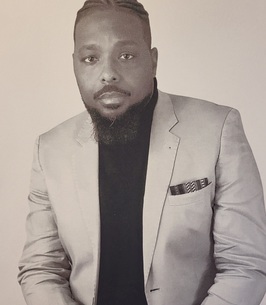 Levester James Jones Jr. was the start of what’s known in his community as the “Jones Family”. He was the firstborn child to Levester and Benita Jones Sr.; born September 23, 1982, in New London, CT. Jr. never did things “ordinarily” including introducing himself to the world; born at only 6 months gestation. 3 weeks later, his father was led by the Holy Spirit to give him back to the Lord, by lifting his fragile body towards Heaven. This was the turning point in Jr.’s health. He began to develop and grow under the loving and faith-filled care of his parents. At the age 15 Jr., was baptized in the name of Jesus Christ by his father.

The love of music and passion for God’s word was always a part of Jr. By age 2, he was strategically banging on his self-made pot, pan, and bowl drum set, courtesy of his mom’s pantry. And his “quiet time” consisted of riding on his little red bike with his ears tuned into his favorite station – dad reading him Bible stories.

Growing up as the only boy in the home to 5 sisters, Jr. became very skilled in crafting jokes; pranks; and persuading others to do his chores. Home is also where he cultivated the cleverness to “use what you could to get the job done” – the abundant supply of barbie doll legs made the perfect pair of drum sticks. Although annoyed, his sisters were never in shock of how their toys became his instruments; and they knew, “if you can’t beat him (literally), join him!” Singing and creating random songs at home, on road trips, and definitely in church, was a favorite past time for him and his sisters. As they grew older, his sisters and mom would sing, while Jr. played the drums or keyboard, at their father’s church: Gospel Lighthouse Mission in New London, CT; throughout their local community; and wherever their father would travel for speaking engagements.

Jr.’s academic experiences were through the New London Public School District. He attended Edgerton Elementary School from 1st-3rd grade; Harbor Elementary School 4th-5th grade; Bennie Dover Jackson Middle School; and the New London High School. Jr. was a star student in class; not always shining for the reasons his parents would have preferred, but let’s just say he has always had an infectious personality.

Growing up in COOLJC led Jr. into life-long brotherhoods. Although, one could argue, those brotherhoods led him into occasional mischief he’d never get away with with his sisters. Those friendships weren’t the only life-long relationships he’d have though. After graduating high school in 2001, that summer the Jones Family took their summer trip to the annual COOLJC Holy Convocation. Instead of returning home, as he normally would, Jr. was “dropped off by dad” (as he would describe it), at the W. L. Bonner Bible College in Columbia, SC. where he majored in Biblical Studies and Youth Ministry. While in college he had the honor of sitting under and gleaning from the late Chief Apostle William Lee Bonner, of COOLJC. Also, during these years he attended the Refuge Temple Church (the late Chief Apostle W.L. Bonner), where he fulfilled the roles of Chaplin of the Armour Bearer Young People’s Union (ABYPU), Minister of Music, and Co-Choir Director of the youth choir. However, of all this, he found another love - his beautiful wife, Dedrie McQueen-Jones.

Jr. and Dedrie married August 15, 2005. In 2006, they decided to move their family to his hometown. Jr. returned to New London, CT and quickly found himself sitting under the mentorship of Minister Troy Oliver at Miracle Temple Church in New London, CT (Pastor Larry Delong). This is when Jr. progressed his gift on the keyboard at an astounding rate. He also began to foster his gifts as Assistant Musical Director and later, Musical Director. These gifts, coupled with his joy for worship eventually flourished his ability to uniquely deliver the Word of God through speech. Though many called him “Elder” and even “Bishop”, he’d simply reply “Don’t give me a title before I earn it.”. Jr. also spent time supporting the music ministry for Shiloh Baptist Church in New London, CT (Bishop Benjamin Watts); in addition to other local churches, events, funerals, and the like. Before his departure to Heaven, he served as the Chief Levite at New Life Christian Fellowship in Ledyard, CT (Pastors Johnny & Sharon Burns Sr.). He was ordained Reverend Levester Jones Jr. on December 9, 2018 by New Life Christian Fellowship, Inc.

In 2018 to 2022, Jr. held “The Flows” – 90 minute power-packed services where the Holy Spirit was invited to flow freely through praise, worship, and word. He also held special events called “iWorship Experience” throughout the years; promoting his beliefs that you have to have a personal relationship with Jesus Christ in order to live for Him. He had a library of personal projects, including writing and producing albums for local artists. At these events he very much enjoyed the fellowship and time spent with his band and other musicians throughout New England.

Alongside Jr.’s music ministry, he worked in the New London Public School system as a para-professional, helping special-need students acquire the skills necessary to successfully transition into society. He also directed the Gospel Choir at Connecticut College for a couple years. His latest project was the Autism Awareness Concert, purposed to bring awareness and understanding to a disease vastly affecting our communities today.

To name all that Jr. was involved in, created, or supported would turn this obituary into a script for a docuseries! However, none of those things competed with his love for his family. Jr. and Dedrie gave birth to 4 wonderful children: Cortlin, Christian, Chanel, and Cera. His wife and children love him dearly, even though they were often the brunt of some of the same pranks and jokes he practiced on his sisters years ago. In between rehearsals, services, sessions, work, etc, Jr. was the dad on the sidelines cheering his children on at their football games, talent shows, and other extracurricular activities. He made sure to make doctor’s appointments and check homework, all while still making time to occasionally spoil his family with his tasty chicken Alfred and his endless supply of candy. Jr. absolutely loved his family; and they adored him back. One of their favorite family memories is when they went to Disney World and Crayola Experience.

As Jr. would say on his way out from one spot to get to another “iight ya, I’m ‘bout to get up outta here”.

This obituary is protected by copyright by New London. Proudly Serving the Community of New London. New London is located in the state of Connecticut, United States.